Pomp & (Wintery) Circumstance in the Carolinas

On the eve of one of the biggest storms to hit the east coast in a long time my cousin and I made a risky trip northbound for our cousins graduation from North Carolina State University. After going back and forth all day with wether or not to brave the weather we finally decided to be adventurous and departed ATL around 9pm. Following some research of radar weather maps and some clever navigating we successfully avoided the brunt of the tempest.

Since we arrived in Raleigh at 3:30am we were justifiably a little late to the ceremony that began at 9am at the Wolfpack’s basketball arena. Nobel Prize winner and NC State alumnus, Dr. Rajendra Pachauri was slated to be the keynote speaker but fell ill at the last minute. The Chancellor, who was blinged out like T-Pain (see below), said a few words instead.

(The Chancellors chain looked like some of the bling that rapper, T-pain wore in this music video.)
After the ceremony and convocation ceremony for the College of Design my cousin took us on a short tour of the campus and we posed for dozens of the traditional graduation groups photos. 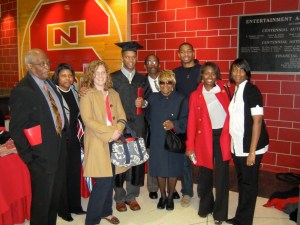 Coming from warm Georgia I spent the entire time hoping to see some snow that was promised by every weatherman on the east coast. Unfortunately I left a little disappointed on the snow front but overall it was great to see my cousin become an alumnus.

(Fun Fact: the Bell Tower @ NC State doesn’t actually have a bell inside. It’s just a recording played over a speaker system.)